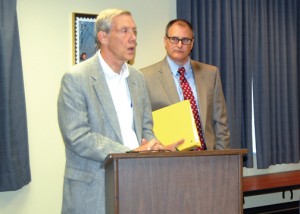 The Batavia Township Community Center is becoming a hot spot for sports activities in the county.

In 2012, Jay Bruce helped fund Brian Wilson Field, a field renovated for the UC Clermont Cougars baseball team and other teams to play on, and now the community center is being sought as a location for soccer events.

Officials with the Clermont County Convention and Visitors Bureau have been discussing the idea with Batavia Township trustees and presented additional information about the idea during commissioners’ July 30 meeting and trustees’ Aug. 4 meeting.

Mark Calitri, director of the visitors bureau, said UC Clermont is planning to create soccer teams at the college and would be interested in using the fields. He said they also have interest from Kings Hammer, a tri-state soccer club.

Calitri said additional soccer fields and parking would need to be added to the community center to accommodate the teams.

Trustees expressed their concerns about having fields available for residents in the township and about how much space the additional fields would take up.

“We have to be careful, we don’t want residents to think we are turning this place over to Kings Hammer,” Trustee Bill Dowdney said.

Calitri brought a calendar with examples of a typical season to the trustee meeting. He showed trustees how many weekend tournaments and practices that would be typical for the teams as well as when the fields would be open for residents to use.

Dowdney said the new soccer fields would consume a large amount of property at the community center.

Dowdney said trustees are also concerned about paying for improvements of the field.

“The elephant in the room is who is going to pay for all of this,” Dowdney said. “Because we don’t have the money.”

Calitri said the township, county, college and soccer clubs could work together to fund the improvements.

He said the township could use some of their Tax Increment Financing money to fund their portion of the up front costs.

Parsons said the township gets TIF funds from the county that can be used for public improvements that can include park improvements.

Calitri said the teams would be charged rental fees for using the fields, which would bring in revenue to the township.

Calitri said the visitors’ bureau has estimated that the soccer fields could have an impact of more than $600,000 for the township and more than $20 million for the county.

Calitri said the tournaments could also be an opportunity for local charities or organizations to volunteer to help with parking and charge a fee that would raise funds for their organization.

Kevin Scheel, varsity boys’ soccer coach for Batavia High School, said that the school hosted a tournament at the community center because construction was going on near the high school fields.

He said he feels the community center would be an excellent place to host additional tournaments, especially ones that will allow children to watch premier teams play.

“Kings Hammer is one of the top clubs in the area,” Scheel said.

In addition to the baseball and soccer fields, Batavia Township Trustees also heard from residents about adding tennis courts to the community center in 2013.

In January of 2013, Batavia High School Tennis Coach Amber Kelley spoke with trustees about adding courts that could be used for practice and matches.

Parsons said they have not forgotten about adding courts to the community center.

Chris Smith, former interim director of CVB, said they are looking to trustees for direction on whether or not they can move forward with field development and financing options.

Trustee Jim Sauls said he and the other trustees need more time to think about the options.

“We recognize you have a tough decision,” Calitri said.

Calitri said that the CVB is looking into other possible locations for fields as well.