Area hotels have a record year 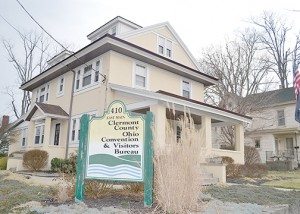 Representatives from the Clermont County Convention and Visitors Bureau announced the organization had a record year last year.

The information was released in a recent report from Smith Travel Research, a company that tracks supply and demand metrics for the hotel industry.

The county’s 12 hotels generated a total of approximately $23 million in revenue, according to Mark Calitri, president of the CVB.

This total represents a growth in revenues generated per room of 10.9 percent over 2014, according to the report.

The county’s growth in revenues generated per room leads the region, which includes Northern Kentucky and Butler, Hamilton and Warren Counties, according to Calitri.

“We’re excited, and it creates momentum going into 2016,” Calitri said.

The CVB attributes the county’s successful year to outstanding sales and event levels, according to a press release.

In 2015, the CVB helped bring a number of sporting events to the county, including various regional baseball and golf tournaments, and the USRowing 2015 Club National Championship, according to Calitri.

“One of the county’s biggest assets is the great outdoors,” Calitri said. “We have numerous hike/bike trails and East Fork State Park.”

The CVB also attributes the county’s success to the establishment of many public/private partnerships, including the Clermont Chamber of Commerce, the Ohio Department of Natural Resources, hotels, retail establishments and local government leaders, according to a press release.

“The ability of the Clermont County Convention and Visitors Bureau to bring a record number of visitors and events into our community means more sales tax, lodging tax and gas tax collections,” said County Commissioner David Uible in a press release. “This results in more resources for our county while lessening the need to increase taxes and fees on local citizens.”

Calitri said he’s looking forward to another busy year at the CVB, including a six-week bowling tournament later this month and a geocaching competition in April.

“The more visitors we have means the more money being spent in the local business,” he added.