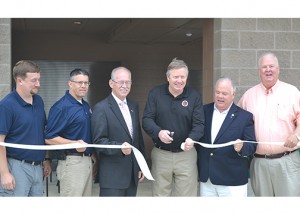 The East Fork State Park Beach House is officially open to the public. Ohio Department of Natural Resources Director James Zehringer, along with other state and local officials, held a ribbon-cutting ceremony on June 6 to celebrate the grand opening of the newly built facility at Harsha Lake.

Construction of the new beach house was part of the $88.5 million designated for Ohio State Parks in the Governor’s recent capital budget.

“We are committed to fixing up our state park system,” said Zeringer.

The new beach house replaces an older facility that had suffered flood damage. The new structure was built above the floodplain to avoid future problems.

“We’ve asked the public to tell us what they want improved at our state parks, and we received more than 7,000 total responses,” said Zeringer. “About 150 of those responses were from East Fork, and people said they wanted a new beach house and shower facilities, new docks and some more camp hookups.”

In October, State Sen. Joe Uecker announced the Ohio Controlling Board’s approval of $934,750 for construction improvements to the East Fork Park Beach House facility, according to a press release.

Zeringer and his team let the public’s responses guide them through the improvement process. The new beach house includes restrooms, changing areas and showers. New docks specifically designed for rowers were added, and 12 existing campsites will be equipped with improved hookups for full service camping.

“In order to attract people, you need a good product, and this right here attracts people. It’s almost like, if you build it they will come,” said Zeringer.

East Fork State Park will host the 2015 US Rowing Club National Championships in mid-July and a geocaching event is set to take place in the park later this year.

“I am especially gratified that the Clermont Crew team is here on this day, which is National Learn to Row Day,” said Schmid. “We are welcoming a number of new rowers from our community who are going to use this, which is one of the finest rowing facilities in North America. We’re incredibly proud and gratified for all the support.”

Uecker also made comments to the public and thanked Zeringer and his team for their work.

Mark Calitri, president of CVB, shared his enthusiasm for the project.

“We are excited about the tremendous economic impact this development will have on Clermont County,” said Calitri.